There are three books in the first collection from Lake Union

There are two sides to every love story. 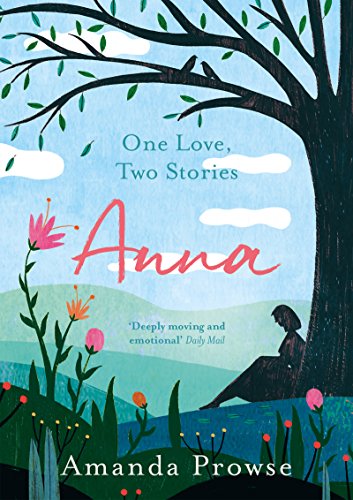 Anna Cole grew up in care, and is determined to start a family of her own. Theo Montgomery had a loveless childhood, and wants only to find his soulmate.

Then, one day, Theo meets Anna, and Anna meets Theo. Two damaged souls from different worlds. Is their love for each other enough to let go of the pain of their pasts? Or will Anna and Theo break each others' hearts?

There are two sides to every love story. This is Anna's.

A Note From Amanda:

I wanted to explore the idea of happiness and what makes people happy so came up with the idea of 'Anna' and 'Theo'. Essentially, Anna is very poor but has a mum who loves her and Theo's family are incredibly rich but they don't have any time for him. So can money buy you happiness, or is having a loving family worth more than having a big house? Anna and Theo's story was originally going to be a single book but I couldn't fit all of the details in, so I split it into two stories. To give it more depth, I told the stories from each of their perspectives separately, so when a scene is shared, if you read both books, you get different information from to give you a richer understanding of the situation. In addition to that, to fill in any remaining gaps, I included a third book in the collection, 'How to Fall in Love Again' which tells the story from Kitty's point of view, a girl who went to Theo's school and knows some of Theo's background. All of these titles can be read as standalone books but when you read all three then the overall story has greater depth and should be read, 'Anna' first, then 'Theo' and finally 'How to Fall in Love Again' which is Kitty's story.

Book 1 of 3 in the 'One love, two Stories' collection. Can be read as a standalone book but better when followed by 'Theo' and then 'How to Fall in Love Again', Kitty's story.
Buy Now via amazon.co.uk

and although the family are poor, Anna and her mum are happy by sara

Reviewed in the United Kingdom on 20 March 2018

Verified Purchase
I have read loads of Amanda Prowse’s books now and would call myself a massive fan of her writing. I always joke that I think she has my house bugged with hidden cameras because I can relate to her books in some way or another, and that has happened yet again in this book.

Anna lives with her Mum and older brother Joe in Honor Oak Park, South London, and although the family are poor, Anna and her mum are happy, older sibling Joe struggles with life and his drug addiction. Anna simply idolises Joe, and one afternoon she plans her wedding to him, lining up her cuddly toys as wedding guests, and with a pillowcase on her head to act as a veil, she proudly tells her mum that they will have two children Fifi and Fox. But after one row too many for Joe’s liking, he leaves and Anna is left with her mum.

When Anna was nine and at school one day, she was taken to the Headteachers office where a social worker explained that her mum had died very suddenly, and unexpectedly at home. Joe was found, and returned home to raise Anna. However, child rearing was low on his priorities but soon the house becomes nothing more than a drug den, and poor little Anna is left to bring herself up. She copes with life by writing letters to her imaginary children Fifi and Fox. When Joe leaves the house one day and never returns, Anna is taken in by her Aunt who is her only surviving relative. Alongside her gay cousin Jordan, they study for their exams, but one evening she over hears a conversation between her aunt and uncle where she her aunt says that she wishes Anna wasn’t in the house, Anna decides to go to return to London. There she searches for her father, but with only a first name, and the fact that he is a Black Cabbie, the search is fruitless and Anna is placed in care. Whilst at Mead House, she keeps her head down, and studies hard, and just before she leaves the care system, she shares her bedroom Shania who is angry with life and the institution she has been thrown into.

When Anna goes out into the big wide world, she secures an office job, and a small but homely flat, and meets Ned, a market stall holder, and his lovely family.

And it is here in the story, that I am going to leave you, to carry on reading and finding out about these wonderful characters for yourself.
I loved this book! Yet again, Mrs Prowse writes in such a way that you feel she is in the room telling you the story, rather than reading it from the page. The characters are completely believable, and I really adored Sylvie, Ned’s mum, who was a real loyal Londoner! The story kept me guessing, even at the end, I was convinced it was going to go one way, but Amanda took us up a different path which I was delighted about.

If I’m honest, I didn’t warm to Theo, but I’m excited to read his side of events in the next book, because I think he has a lot of demons going on.

And why do I feel that Amanda bugs my house, or is part of my life? Well, seventeen years ago, I was pregnant, and from the day I found out and for the next three months I wrote letters to my unborn baby, explaining how happy I was to be pregnant, and telling them about all the fun and fantastic things that we were going to do together as a family. Sadly, Mother Nature had other plans, and that dream was taken away from me at 12 weeks, and the letters were buried in my back garden. Reading about Fifi and Fox didn’t make me sad, it reassured me that writing letters to unborn children is the most natural thing in the world, and that I wasn’t mad (although I thought I was at the time!!!)

Amanda Prowse’s characters are contained in the book for hundreds of pages or so, but will be in your heart forever.
37 people found this helpful
This is so real by Tham
Reviewed in the United Kingdom on 21 April 2019
Verified Purchase
Can someone’s life be so tricky? Life gives you the best you could ever imagine. Then, while you’re surrounded with love and happiness, the good things are all packed up and taken away. All these happen when you are in school, and you are nine?

It is horrible. But it is so believable. Amanda, the writer, gave the story such abundance of emotions I could hardly contain. I was intrigued with Anna, the protagonist, about her make-to-believe kids, Fifi and Fox. Anna imagines they were her children even when Anna was only about seven. She writes to them imagining that they were her children.

The story follows Anna’s growing up years until she meets Theo, her boyfriend and would-be husband. The imaginations, the wishful thinking, the happiness, the disappointments and the heartbreak. All rolled in one volume of fantastic writing.

Everything in the book is so real. The places, the characters, the food, the transport, everything. It is like looking at a girl growing up lonely, wanting her mother, feeling betrayed and yet feeling positive and looking forward to a happy life.

There are so many places I’ve got to stop and stifle a tear. I need to look away from the book and think about the situation the writer just mentions. And let them sink in.

I could never have thought of such a life without a parent. And Amanda wrote it so well, as if she were Anna and she is telling me her story so vividly I feel with her.

Now, apparently there are another two books after this that continue the story. This book is about Anna. The next one is about Theo, Anna’s husband. And the third installment is about Katie, I don’t know who Katie is but I will get the book.

My next read will be Theo... after a few thrillers.

The No Greater Love boxed set includes Amanda's first three novels, Poppy Day, What Have I Done? and Clover's Child